All evening I keep thinking about how unbelievably fast today went, and how great it was! Rich stayed home today to work on my car while Dad and I went roaming around Susquehanna County and Broome County, New York.

Dad picked me up around 7:15am on what turned out to be a dark, rainy morning. We drove north through Fleetville and then headed toward Glenwood, encountering a flock of two adult and eight baby turkeys along the way! Over the mountain we went into Hop Bottom, where we drove slowly past Hortman’s Garage in case Hop Bottom history aficionado Alex was there (he wasn’t, although the sign perpetually says “Open”). We thought we’d ask him about the Midway Restaurant shown in a postcard we have (where was it, exactly?).

Next on our list was to search for the culvert in Kingsley that is featured in another postcard from a series I’ve been collecting that documents the Clarks Summit—Hallstead cutoff. Dad knew exactly where the culvert was, although we missed the turnoff the first time we drove by.

When we came to the Martens Creek Viaduct we knew we had gone too far, so we turned around and went back, and turned onto Oakley Crossing Road. After a hundred feet or so the culvert was in front of us! It is clearly the one shown in the postcard, but it’s much more overgrown now. Unfortunately it was far too dark on this rainy and heavily overcast morning (and in such a deeply wooded area) to take a decent photo. We passed through the culvert and continued on the somewhat muddy Oakley Crossing Road down to Route 106 and ultimately back to Route 11.

We arrived at the square in Montrose just a little after 8:00am. It was cloudy and cold, but dry. And unlike last year, there wasn’t a single person in line yet for the pancake breakfast! Dad and I decided that we would each get one pancake (with blueberry sauce—yeah, live a little Dad!) and an extra sausage patty for each of us. I know they’re awful, but I really like the cheap breakfast sausage patties.

Only a few tables were occupied so we claimed one easily and put down our trays. Dad went for coffee before digging in, and while he was gone, the wind came out of nowhere. It whipped the tablecloths around and blew the empty cups off the trays that the young students were clearing from tables. Mostly, though, it was just cold!

We ate quickly to keep ourselves warm and enjoy the food while it was still relatively warm as well. To our disappointment, the musical “entertainment” didn’t begin until 9:00am, by which time we were already done eating, so we missed out on the Jesus music this time. I couldn’t resist buying a local history book of Hop Bottom and Lathrop at the Historical Society tent. They never fail to entice me with their offerings!

In order to warm ourselves up we decided to take a little walk around town. Our first stop was Chocolates by Leopold, where I thought I would get Rich a sweet treat since he wasn’t able to come with us today. Unfortunately, the store didn’t open until 10:00. Odd for blueberry festival day, isn’t it?!

We were close to McCormack’s at the Montrose Inn, so I took Dad there to have a look at their menu. I told him how much Rich and I enjoyed the food (and the beer!) when we had lunch there last year. While the restaurant and pub were still closed since it was so early, the lobby was open so we were able to go inside and check out the menu. Dad agreed that it sounded great and that he’d like to try it soon, maybe as an alternative to Twigs the next time he goes to see a movie in Tunkhannock.

We walked back to the courthouse square via Church Street, and along the way somehow a cutting of an epiphyllum cactus ended up in my hand. I think Dad was somehow involved.

He claims to know nothing about it.

Having thus completed our tour of Montrose, we made our way back to the car. Since our main motivation for traveling around the southern tier of New York was going for spiedies at Lupo’s Char-Pit, we figured we’d best do some hiking first to offset the caloric intake we were anticipating.

Our original idea was to hike at Salt Springs State Park, as we have done several times in the past after breakfast at the blueberry festival. But yesterday Rich suggested that I take Dad to the nature preserve at Binghamton University, where Rich and I hiked a few weeks ago, and explore a few more of the trails with him. Dad liked the idea, and off we went—following back roads including an aptly named “Winding Lane” from Montrose, it was a pretty and interesting ride to the university. 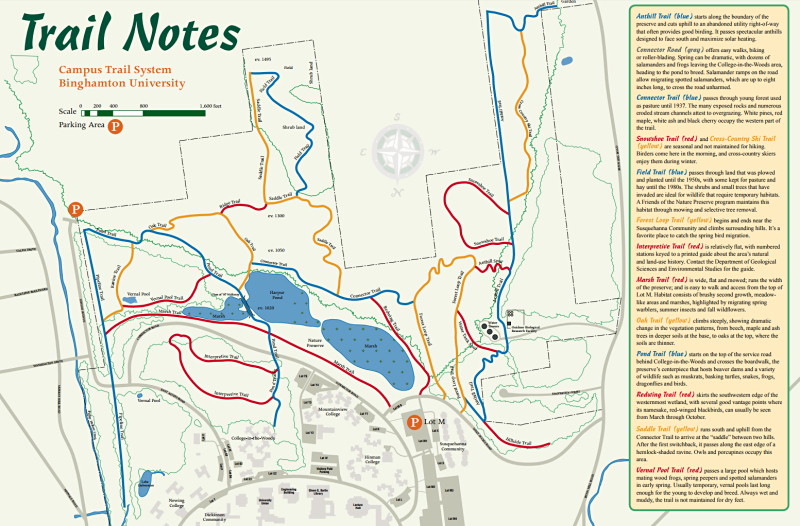 We parked in Lot M1, as Rich and I had done a few weeks ago, for easy access to the trails. There are many short trails that can be combined to make a number of loops. We began by hiking the eastern half of the Forest Loop Trail, hiking uphill and south toward the Connector Trail and then hiking the first half of the Saddle Trail.

Here we had a choice: complete the loop formed by the Saddle Trail and the Field Trail, or take the Ridge Trail across to the southern half of the Oak Trail. Dad hasn’t been hiking much lately, so we decided to keep things a little simpler and take the second—shorter—route.

The Oak Trail makes a long, steep descent down to the Pond Trail when hiked in this direction; use caution when wet, as the trails here often are. I’m not sure why switchbacks weren’t built into the steep sections of this trail as they were on other trails in the preserve.

After a short distance on the Pond Trail we joined up with the Ravine Trail, and then hiked the very wet Vernal Pool Trail west to join up again with the Pond Trail, at a point very close to the boardwalk—the “centerpiece” of the preserve. The Marsh Trail took us back to the parking area after a hike of approximately 2.6 miles.

Trails were damp to wet due to all the heavy rain recently, but Dad and I didn’t mind much. The heavily wooded trails were peaceful at all points, and we encountered only a half-dozen other people during the afternoon. We shared quiet conversation at times and just enjoyed the silence at others. Mushrooms and fungi were common features of the trails in the higher elevations, and we saw a deer munching away fiercely at a bush in Harpur Pond while we crossed on the boardwalk.

Just like the deer, we would soon be munching away fiercely too! Our next stop was Lupo’s. The place was nearly deserted when we pulled into the parking lot right around noon—highly unusual, I thought. We walked right up to the counter and ordered our two six-inch spiedies, large fries and three pounds of raw marinated meat to go. But not to fear, just a moment later the parking lot began filling up, and the place was as busy as ever. I guess we timed it just right.

We ate at one of the picnic tables adjacent to the parking lot. The sandwiches were hot and fresh and fantastic as always. Dad was thrilled to try an authentic spiedie right from the source! He had brought two cans of Polar sparkling water for us to drink, and they were a perfect complement to the sandwiches. I was in a food coma on the way home; fortunately I wasn’t driving. We took Route 11 back but spent a few minutes on I-81 in Binghamton, where we spotted an overhead sign mentioning a Spiedie Fest! Something to check out next year?!